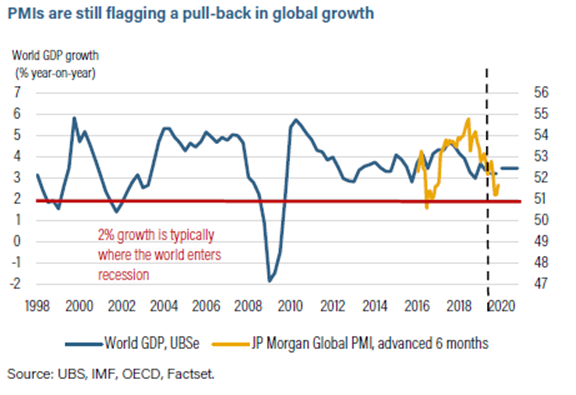 This week President Xi blinked, with a promise to buy $50b in US farm goods. In return, President Trump agreed to suspend an upcoming tariff increase on at least $250b in Chinese goods from 25% to 30% which was due to take effect this week. Both sides ultimately agreeing some deal is better than no deal.

Morgan Stanley said in a note that they don’t think this will be a long term game changer as there is no viable path to reduce the existing tariffs on Chinese goods. It is because of this that they do not think corporate behaviour will change and therefore drive stronger global growth. JP Morgan & Goldmans are in similar agreement, even suspecting trade wars are set to escalate ahead of the 2020 US Presidential elections.

The IMF has estimated that the trade war (if left to fester) could cost the global economy around $700b – an amount which is equivalent to the size of the Swiss economy.

The chart to the above shows global growth (blue line) which is an historic indicator and PMI (manufacturing data & yellow line) as a forward looking indicator. So far the yellow line while it has dropped dramatically, looks like it is taking tentative steps at turning… which is a positive sign.