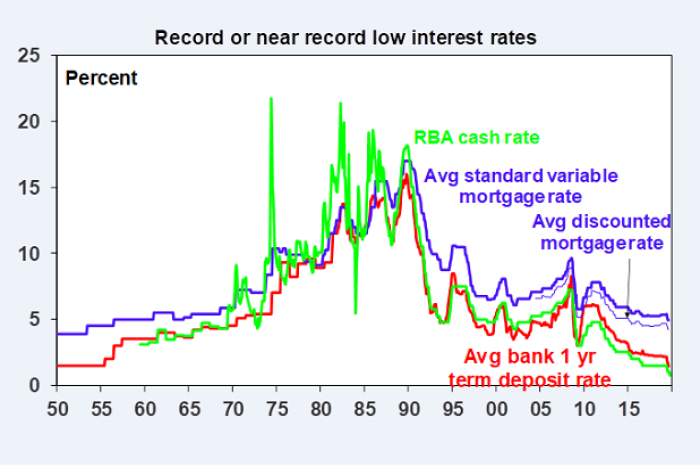 The RBA cut interest rates (yet again) to another record low this month. The official cash rate which is where banks borrow and lend overnight to the RBA now stands at 0.75%.

The problem is the average Australian borrower is not seeing this attractive level of interest. The chart shows the green RBA cash rate at record lows, the 1 year term deposit rate tracking closely (red), and the big gap between the red and blue lines. That red/blue gap is widening and represents the NIM – net interest margin between where the bank borrows, and where it lends.

The gap is in part because Aussie major banks own 80% of the home loan market and therefore have pricing power. It also reflects the greater regulatory requirements which include holding larger capital buffers to keep banks safe for the Australian consumer. The RBA is fast running out of bullets, and cutting rates to 0.75% to stimulate employment seems a null event.

While the RBA may have one more rate cut left in it, the benefit won’t really be felt by 5 million Australian borrowers (from the major banks)… but rather the 18 million deposit holders & pensioners will bear the cost; losing income and spending power. This is the RBA’s quandary.