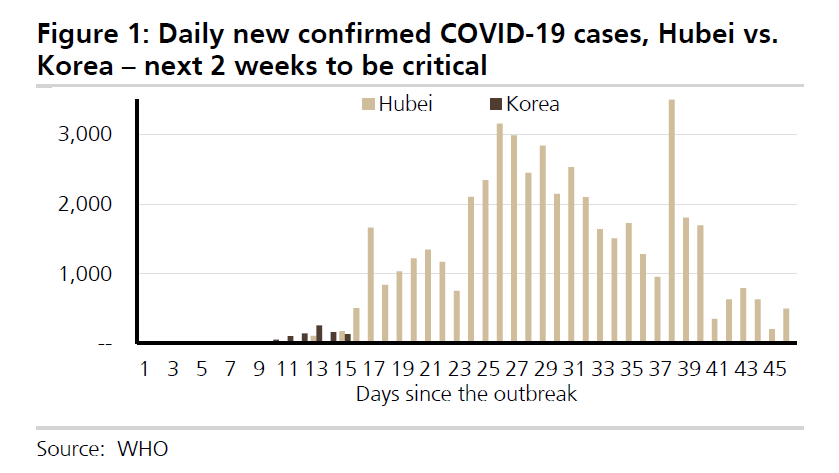 Coronavirus has a new name (Covid-19) and has entered new markets. Stocks are finally reacting, and at the time of writing of this, we have now wiped all of this year’s gains off the table. The S&P 500 shedding 7.6% in four days.

To date, we’ve had conflicting reports that the virus was under control in China. But with new cases reported each day, and deaths following in new areas such as South Korea, Italy, and now Spain, it seems as though we a creeping into a pandemic. As of the 25th February, South Korea has confirmed 977 cases (compared to 31 cases a week ago) – making it one of the most affected places outsides of China’s Hubei province. The following chart compares the two regions, as the populations, area and surge in new cases show some similarities.

A simple comparison between the two regions suggests new confirmed cases in Hubei could peak two weeks from now. But there are lots of variables which can change the outcome including differences in policy response, medical systems, and legitimate reporting.

Economically, the outbreak has temporarily shocked sales and investment, but analysts believe demand is suppressed rather than reduced, and expect a rebound once the outbreak is over. The question is when the outbreak will be contained, and the crisis deemed over.

The Chinese central bank (PBoC) has been pumping money into the system to the tune of $185b USD since 18 February. Citibank expect China’s growth to drop to an annualised GDP of 4% (from 6% p.a), with 1st quarter GDP expected to be back at 1990 levels. Weekly exports from China to the US have more than halved, with more downside risk expected in the short term, as the pace of work resumption is slow, supply chains are disrupted, and more service sector demand is being lost. Base case estimate and analysis revolves around the Coronavirus impact contained by the end of the first quarter.

With that scenario – growth is expected to have a V shaped rebound in Q2-3 this year as the Chinese government takes action, lowering policy rates,easing credit, and providing fiscal support.